Nitrate is a naturally occurring ion which contains 3 oxygen atoms surrounding a central nitrogen atom. Nitrate is formed naturally by bacterial nitrogen fixation and is therefore found in soils, effluents and surface waters. Nitrate is also produced artificially on a commercial scale, used as a preservative in cured meats and, due to its high solubility and biodegradability, as a carrier for other nutrients in fertilizers.

ISO 17025-accredited Beta Analytic provides nitrate concentration and isotopic measurements, which can be used to decipher the source(s), environmental alterations and fate of nitrate in the environment.

The results are also presented graphically on a plot which includes representative areas of the isotopic composition (δ18O and δ15N) of various nitrate sources (Kendall et al, 2007; Hastings et al., 2013). 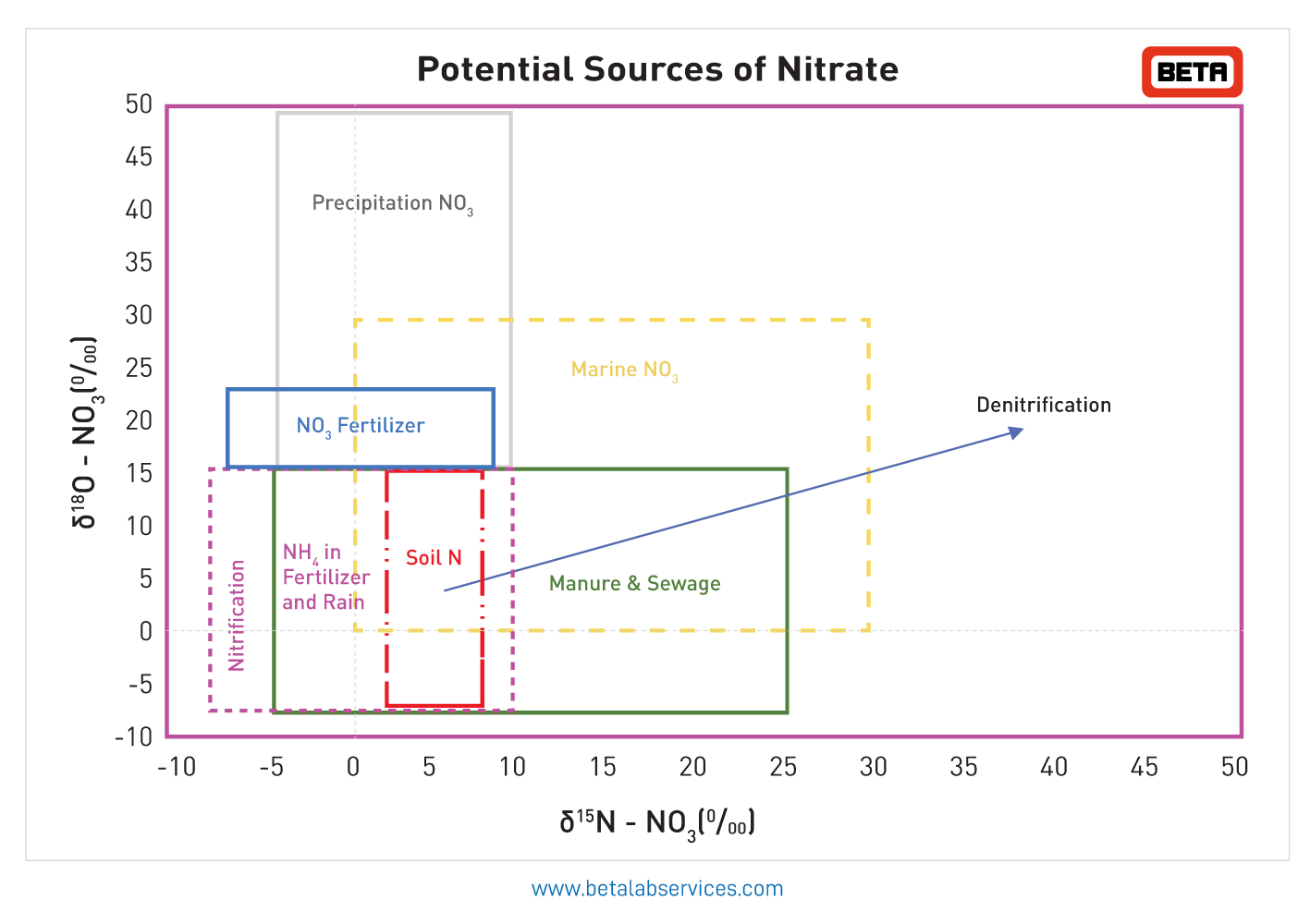 These differences are expressed as delta values and are compared to internationally accepted standards.
For example:

A nitrate ion in nature will likely be altered, for example by denitrification, a process by which bacteria utilizes NO3– . During denitrification, microbes preferentially target the nitrogen-14 and oxygen-16 bearing nitrate ions, leaving the residual nitrate enriched with the oxygen-18 and nitrogen-15 isotopes. Nitrification has the opposite effect.

Source, oxygen availability, pH and land use all play a part in the isotopic values of nitrate and should be considered when analyzing isotopic data. The isotopes of nitrate are a useful tool in understanding where nitrate is originating from and what processes the ion had undergone before reaching your sample vial.

Why is an excess of nitrate a concern?

The overuse of nitrate-based fertilizers, natural and artificial, in this past century has resulted in an abundant amount of nitrate in top soils, which is then transported into the water table via infiltration. High concentrations of nitrate in drinking water can be toxic (10mg/L or higher EPA, 2018), starving blood of oxygen via methemoglobinemia.

Furthermore, high levels of nitrate in surface waters will cause an overstimulation of algal growth. These algal blooms block sunlight and create anoxic zones (very low concentrations of dissolved oxygen) which create an uninhabitable environment for marine life. Eutrophication can have large negative impacts on marine and fishery industries.

Disclaimer: This video is hosted in a third-party site and may contain advertising.
This video excerpt is part of Beta Analytic’s webinar: Nutrient Source Tracking