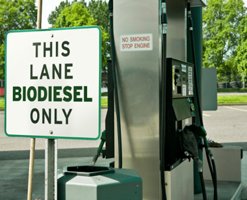 Biodiesel is considered to be a good petroleum-based diesel replacement for use with compression-ignition engines because it emits less harmful gases and sulfur when burned. Biodiesel is also considerably safer than its fossil-based counterpart since it is non-toxic and less combustible (higher flash point). Although biodiesel contains about 8% less energy per gallon than petroleum diesel, no significant difference in performance or fuel economy has been reported.

The U.S. Department of Energy says there is enough supply of virgin soy oil, recycled restaurant grease, and other feedstocks to produce about 1.7 billion gallons of biodiesel per year under policies designed to encourage biodiesel use in the country.

Biodiesel is produced through esterification. Fats and oils are mixed with an alcohol, usually methanol, to form fatty acid methyl esters in the presence of a catalyst, usually sodium hydroxide. Glycerin is a by-product of biodiesel production.

There are many incentives and laws for the use of biodiesel and bioblends at state and federal levels. The state of Washington has the most with 4 incentive programs and 13 laws. Most states offer tax exemptions and deductions to encourage people to use biodiesel. B100 and blends of B20 or higher qualify for alternative fuel credits under the Energy Policy Act of 1992.