Sights and Sounds of EuropaBio’s EFIB 2010

From October 19 to October 21, 2010, 320 delegates across the globe converged in Edinburgh, Scotland, for the third annual European Forum for Industrial Biotechnology. At least 50 industry experts took center stage to talk about their latest products and researches as well as developments in policy, business, and financing of Europe’s bio-industries.

EFIB 2010 in Edinburgh, Scotland
More than 30 companies were featured at the exhibit hall. ASTM D6866 service provider Beta Analytic was one of the exhibitors of the event.
Beta Analytic’s Booth at the EFIB 2010 Exhibit Hall
Beta Analytic research associate Alex Shroff met clients and introduced ASTM D6866 testing to the other delegates. He found out from a member of the CEN technical committee for biopolymers, TC 249, that the final version of a European testing standard for biomaterials will be released in March 2011.
Alex Shroff (left) with one of the speakers, C-LECTA’s Dr. Andreas Buthe
This year’s forum was held at the Sheraton Grand Hotel & Spa Edinburgh. EFIB 2011 will be held in Amsterdam, The Netherlands. 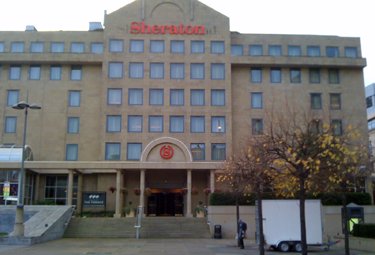 This entry was posted on Wednesday, October 27th, 2010 and is filed under Beta Analytic Updates, Biobased Products .

Carbon-14 analysis of natural products measures the percentage of biomass-derived natural versus fossil fuel-derived synthetic materials. It is a useful tool to detect adulteration with synthetic material in products such as flavors, fragrance, cosmetics, supplements and essential oils.

A standard used to measure the renewable/biogenic carbon content of any solid, liquid, or gas through radiocarbon dating

The EN 15440 is a standard in Europe that includes 3 carbon dating-based methods for measuring the biogenic fraction or biomass content of solid recovered fuels.

The CEN/TS 16137 is a European technical specification that provides test methods for measuring the biobased carbon content of plastics and other carbon-containing polymers.