Mr. Shroff was one of the speakers at the event held in London on March 1, 2011. The other speakers were Dr. Ben Sheridan of the British Standards Institution, Dr. John Williams of the NNFCC, Jöran Reske of Interseroh Dienstleitungs GmbH, Chris Manson-Whitton of Progressive Energy, and Andy Sweetman of Innovia Films, who is the current chairman of the European Bioplastics Association. The conference highlighted the significance of creating a standards-led market for biobased products in the UK and throughout Europe.

The NNFCC is the UK’s national center for biorenewable energy, fuels, and materials. 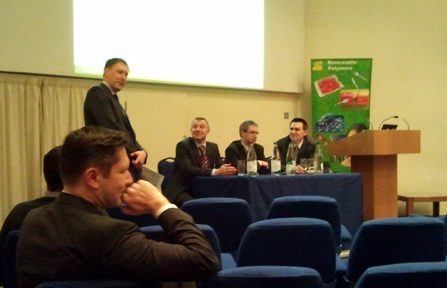 One key difference between materials from renewable sources and those produced from fossil inputs is the level of carbon-14 in them; renewable materials have carbon-14 while fossil inputs no longer contain this weakly radioactive carbon isotope. Quantifying a material’s carbon-14 content provides a measure of its biobased content, which is defined as the “amount of biobased carbon in the material or product expressed as a percent of weight (mass) of the total organic carbon in the material or product” as per the ASTM D6866 standard.

This entry was posted on Thursday, March 10th, 2011 and is filed under Beta Analytic Updates, Biobased Products .