This discussion is a simplified introduction to radiocarbon dating. There are exceptions to the theories and relationships introduced below that are beyond the scope of this discussion. 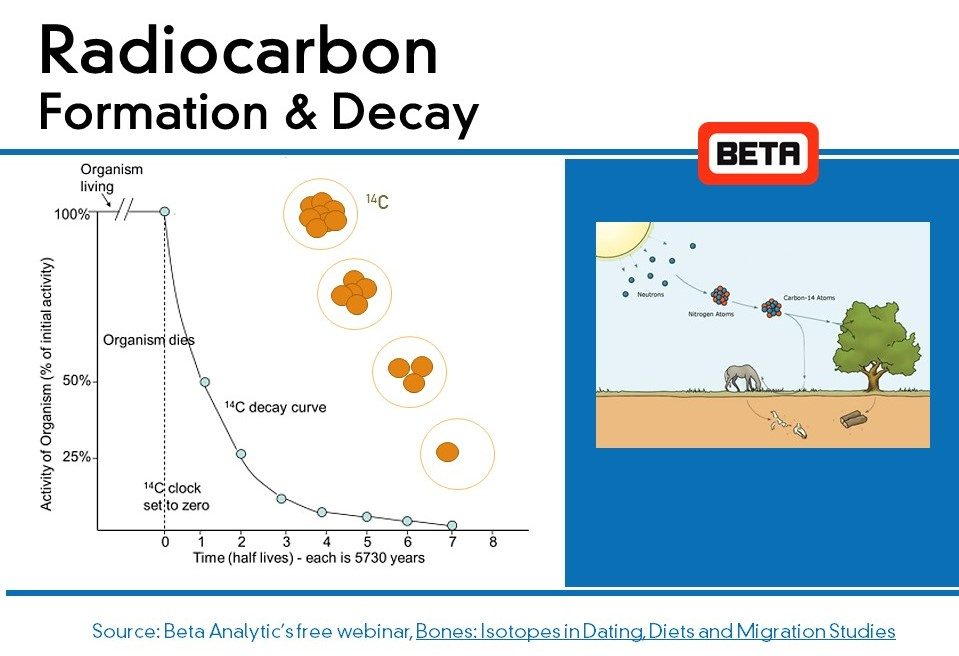 Carbon is the basis of life and is present in all living things.

Radiocarbon, or carbon-14 (also written as 14C), is an isotope of carbon that is unstable and weakly radioactive. Carbon-14 is present in all living things in minute amounts. Since it is radioactive, it gradually fades away by radioactive decay until it is all gone. Radiocarbon dating uses carbon-14 to determine the last time something (or someone) was alive.

Carbon-14 originates in the upper atmosphere of the earth and is created when neutrons originating from solar radiation bombardment collide with nitrogen in the air. A reaction occurs and a tiny number of these collisions convert nitrogen to carbon-14. This carbon-14 immediately starts to radioactively decay but is constantly being recreated. This leaves the amount in the air relatively constant.

Radiocarbon immediately reacts with oxygen in the air to form carbon dioxide (CO2). This carbon dioxide rapidly mixes throughout the atmosphere, where at ground level it is taken in by plants during photosynthesis. This process is constantly ongoing, so that at any point in time the amount of carbon-14 in living plants is the same as the amount of carbon-14 in the air around them.

Living plants are active components of the overall food chain. Animals eat plants and/or other animals; humans eat plants and animals. Therefore all living plants, animals, and human beings have the same amount of carbon-14 in their bodies at the same time. Their bodies are said to be in “equilibrium” with carbon-14 in the air. Although carbon-14 is radioactively decaying away in the body, it is constantly being replaced by new photosynthesis or the ingestion of food, leaving the amount relatively constant.

When a plant stops assimilating carbon dioxide or when an animal or human being stops eating, the ingestion of carbon-14 also stops and the equilibrium is disrupted. From that time forward, the only process at work in the body is radioactive decay. Eventually, all the carbon-14 in the remains will disappear. This principle applies equally to a person dying, a corn stalk being cut down, or to a soybean plant being pulled out of the ground. When they stop living, they stop taking in carbon-14 from the air around them, and the amount of carbon-14 in the remains gradually disappears.

After 50,000 years, a fossil won’t have any radiocarbon left in it. Carbon-14 will have all disappeared by radioactive decay. When a radiocarbon dating lab doesn’t see any carbon-14 in a fossil, it knows the fossil is more than 50,000 years old. Petroleum and dinosaur bones are examples of fossil materials that no longer have carbon-14 remaining in them.

Disclaimer: This video is hosted in a third-party site and may contain advertising.

Radiocarbon dating is applicable to biobased content measurements in manufactured products because they contain some combination of recently living materials and fossil materials. The standard developed for this purpose is called ASTM D6866.

Recently living materials (the biobased component) have Carbon-14 in them while fossil materials (derived from petroleum) no longer have this weakly radioactive carbon isotope. Thus all the carbon-14 in the product comes from the biobased component. In the case of a product containing both crop-derived and petrochemical components, ASTM D6866 analysis will use the carbon-14 content to calculate how much of the product is derived from plant components vs. the petroleum-derived components.